Tradition: the handing down of statements, beliefs, legends, customs, information, etc., from generation to generation, especially by word of mouth or by practice.

I think about the concept of tradition most every day, as it seems that so much of what we do in our daily lives and especially here at camp, involves some sort of tradition. After seventy-five years of camping tradition, Nicolet certainly has seen its’ share of beliefs, legends and customs. I’ve also personally observed these various forms of traditions morph and evolve over the decades, but there are some that will always remain steadfast and be remembered by all generations of Nicolet campers and alumni. 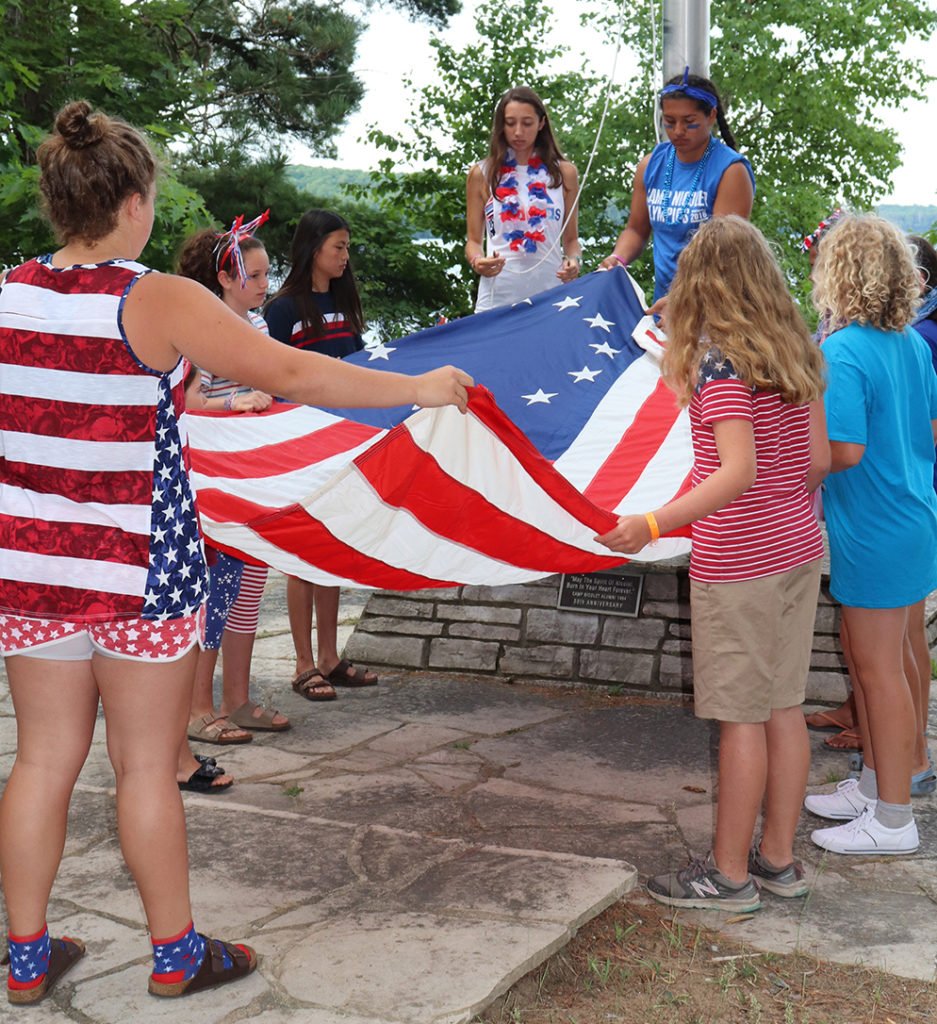 Many of our camp traditions have become routine such as flag raising and lowering, caper cabin clean-up time each morning with a reward for the cabin with the most points at the end of each session, Wednesday cookouts, campfires on Saturday evenings and the pine cone wish during final campfire, burning of the “N”, and of course, our very special all-camp days such as the annual Marathon Day and the Nicolet Olympics every four years.

A few days ago Nicolet’s traditional Fourth of July celebration was held in true red, white, and blue colors and included the Advanced Camper pots n’ pans wake-up, Paul Revere’s ride through camp, Independence Day-themed cabin skits, relay races, and a much anticipated trip to Red Arrow Camp for a BBQ supper and fireworks. A wonderful fun-filled and exhausting day! The Fourth of July is certainly a national holiday (much to the delight and curiosity of our international staff and campers), and most all we do at camp literally explodes with tradition. 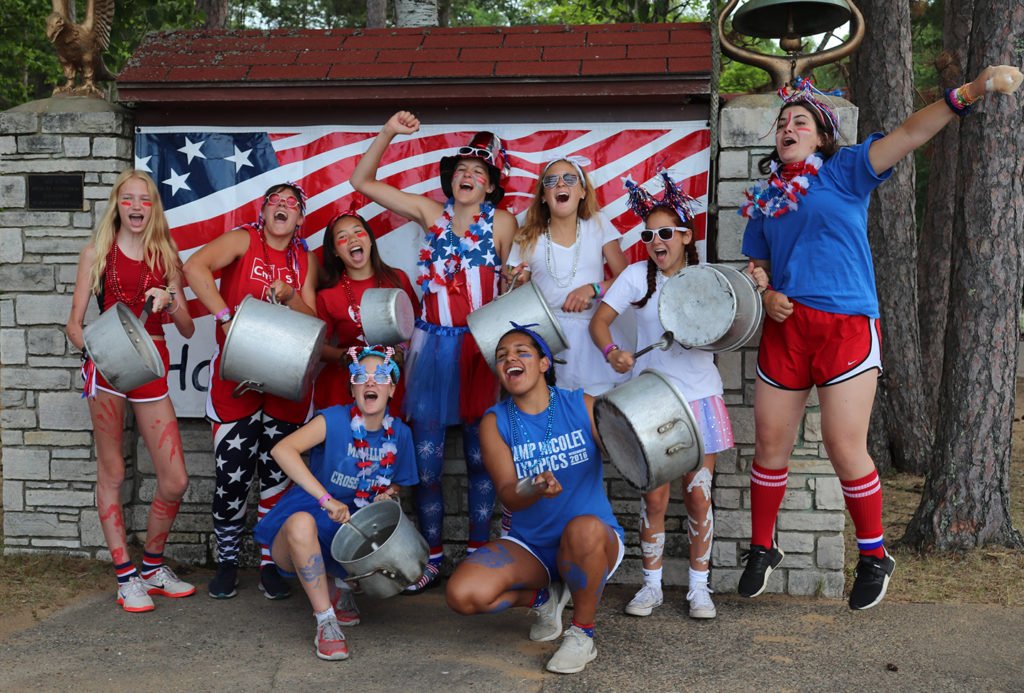 The Advanced Campers carry on the tradition of waking up all the campers with pots and pans with much excitement on the morning of the 4th of July.

Because I grew up at Nicolet and became a camper at age six in Little Fawn, I’ve been able to observe many of these traditions morph and change over the decades as new generations of campers and staff join our big Nicolet family. Songs change over the years (both tunes and words!), attire changes (pleated shorts to boxer shorts to yoga tights), camp graces sung before meals (have become non-religious), ACs used to be in charge of Sunday BBQ but now have the privilege of being team captains and competing in the “balloon break”. Campers now choose their camp activities rather than go to every core activity with their cabin group – a reflection of the preference for more choices at younger ages. Gone are the days of “clubs” in horseback riding and swimming where campers were secretly invited to join. Instead, Tenderhoof, Bangtails, etc. have become skill levels to accomplish and encourage individual goal setting. Activities are inclusive, rather than exclusive. Society in general has prompted the evolution of some traditions, as there is nothing so constant as change. As a summer camp, Nicolet prides itself on remaining true to the traditions that encourage pride, acceptance, and self-confidence. At the same time, we strive to update and adapt current expectations and beliefs in the best interest of our camp community and the growth and safety of our Nicolet girls. 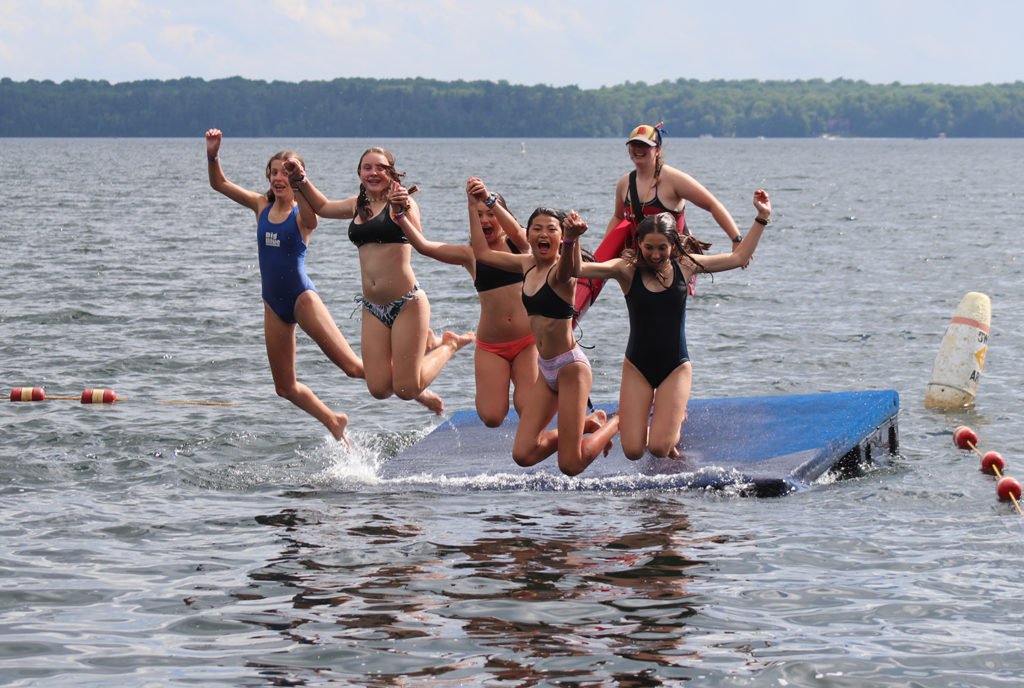 Even though the old large raft has been replaced, swimming into the perimeter and jumping off of one of the two smaller rafts is still one of the highlights of All Camp Dips!

No worries, the myth of Camp Telocin, the lake heaters, the Wishing Tree, and “’round the table you must go…” will always remain traditional parts of the Spirit of Nicolet culture! Traditions are what make a place special. “Be it ever so humble, there’s no place like camp!”

The famed “Wishing Tree” with all its’ magical glory.

“Everyone was so kind and attentive. I enjoyed getting the letters and seeing the excitement in our daughters handwriting. She survived without her phone! We have camp as a reference now, as we remind her of how much she accomplished without devices or streaming media”